Hide and Squeak: Rats at Play

Hide and Squeak: Rats at Play 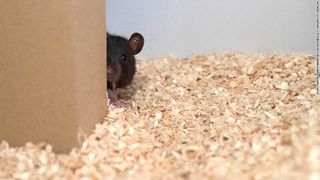 It is not often that a paper in Science brings a big grin and just makes you feel good, so it was a standing room only crowd in our little seminar room when graduate student Ashley Marquardt presented at weekly journal club “Behavioral and neural correlates of hide-and-seek in rats”.

Inspired by videos on YouTube showing cats and dogs engaged in what appears to be hide-and-seek with humans, scientist Juan Ignacio Sanguinetti-Scheck at Humboldt University in Berlin, Germany decided to see if even laboratory rats would find this a fun way to pass an afternoon. Starting with six young male rats, master’s student Annika Reinhold formed a bond with each through daily interactions in which she was their sole social partner.

In a large room filled with cardboard lean-to’s big enough to hide a human and small covey holes optimal for hiding a rat,  she  used a series of incremental steps to teach them that when they were placed  in a box with the lid closed, after a  short period the lid would open (which she  controlled remotely), and then it was time to seek, with her crouching out of sight behind a makeshift barrier.  Their reward for finding her was social interaction that included tickling and petting. All of the rats learned and eagerly engaged in seeking behavior and five of the six also learned to reciprocate by hiding.

Their choice of hiding places included some that were opaque,  and hence they were genuinely hidden, while others were transparent, what the scientists called “stupid hiding places”. But these rats were no fools, they picked the opaque ones. And here is where it gets really interesting: They would regularly break off the session of social interaction, which was supposed to be their motivation, and run away to hide again, thereby prolonging the game. This is particularly important because it means the rats were not working for a reward, they were having fun. And this speaks to a major mystery in our understanding of play.

Play is a paradox. It has captivated behavioral neuroscientists for decades yet we know relatively little about its regulation or meaning. The purpose of play is debated by child psychologists, anthropologists, behavioral neuroscientists, and evolutionary biologist. Theories range from the fairly obvious, a rehearsal for adulthood, to the opposite extreme, that play is not a specific behavior at all but rather a byproduct of a maturing nervous system.

There is a growing consensus that play is essential to appropriate adult social behavior, cognition and reproductive success, but why this is so remains a mystery. There are 3 recognized types of play:

2) object play by a lone animal;  carrying, flipping, flinging an inanimate object, believed to be related to foraging

3) social play between two or more similar aged conspecifics; chasing, wrestling and boxing, which may reflect aggression or mating.

Social play is structured, with inherent rules about reciprocity, turn taking and pacing. Interactive play is also the first non-mother directed social behavior that young animals engage in. A common feature across species is the tendency for males to play with  each  other more intensely and frequently than females, but why this is the case is unknown.

Scholars of play have divided the patterns into three levels based on complexity, with tertiary play being the most advanced. In tertiary play there is an initiating “attack” which instead of being avoided or deflected is responded to in a manner that maintains the interaction. In rats, when one animal pounces on the nape of the neck of another, the other responds by rolling on its back into a supine position that accepts the pounce, referred to as a pin.

You have probably  seen  similar  behavior in puppies or kittens. Tertiary level complexity is reached when the pinned animal then initiates a new round by pouncing on their partner, thereby prolonging the mutually interactive play bout. As with other forms of play, tertiary play involves actions that have become divorced from the underlying functional system from which they may have been derived, meaning that pouncing was derived originally from neural control of aggression and so on. That pouncing is divorced from aggression is evident in the clear rewarding aspect of play for both participants. And now we have hide-and-seek, which in this study doesn’t even involve members of the same species yet appears to fit all the criteria for social play in that it is both rewarding and divorced from any function.

It is easy for us to believe our cats and dogs have a sense of fun, we can see and feel that they are happy when playing. But rats? This doesn’t seem so obvious. Further evidence of the rodential state of mind comes from their vocalizations, which are in the ultrasound range and so require special equipment to record. It has long been known that vocalizations in the 40-60  kHz range are “happy” calls,  meaning they occur when a rat is generally satisfied with life. Here the rats would squeal with delight when they found their hiding human, and even while simply on the hunt, but when they themselves were hiding they went radio silent. We can’t ask a rat what it is thinking, but it sure looks like they not only know the rules, they know it is all in good fun. Now if we could just teach them to call “olly olly oxen free!”.

Back To Top
Make Money