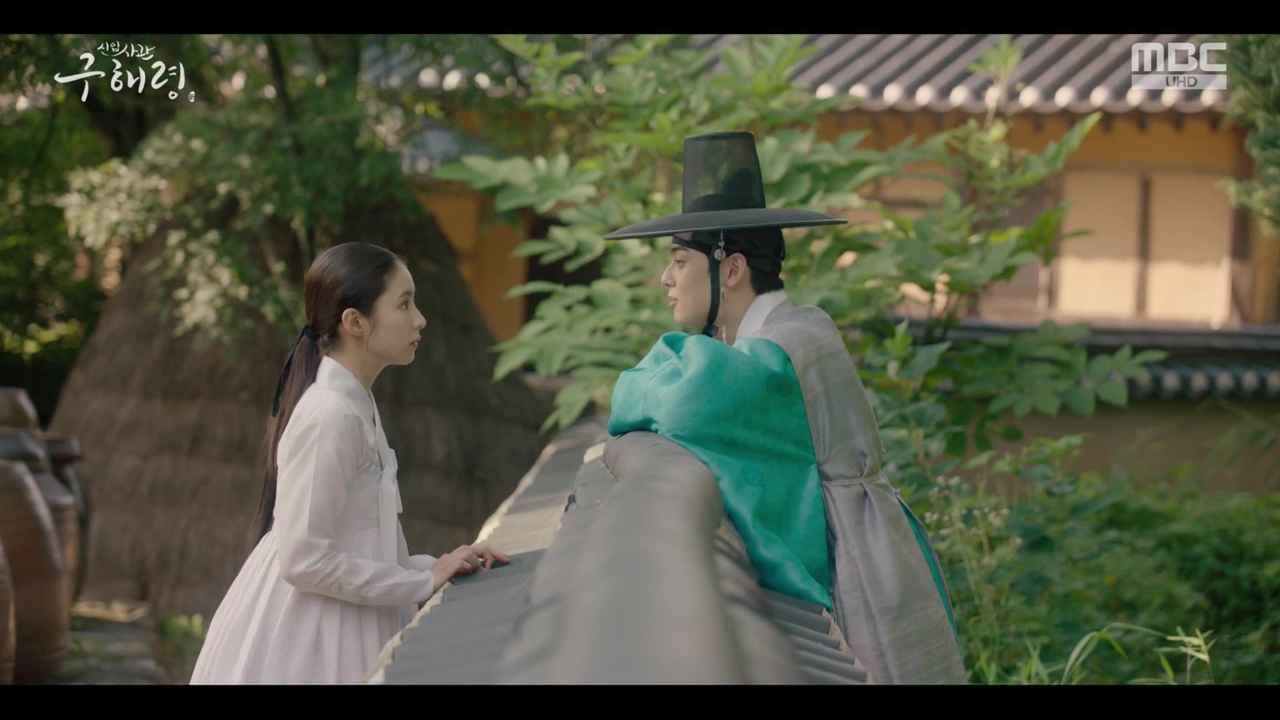 This week is all about the price of devotion, and what one might have to sacrifice for believing in—or loving—what society says is forbidden to someone like you. For our protagonists, falling in love was easy, but what do you do with those feelings when one of you is a sheltered prince and the other is a female historian who is fiercely protective of her hard-won independence? 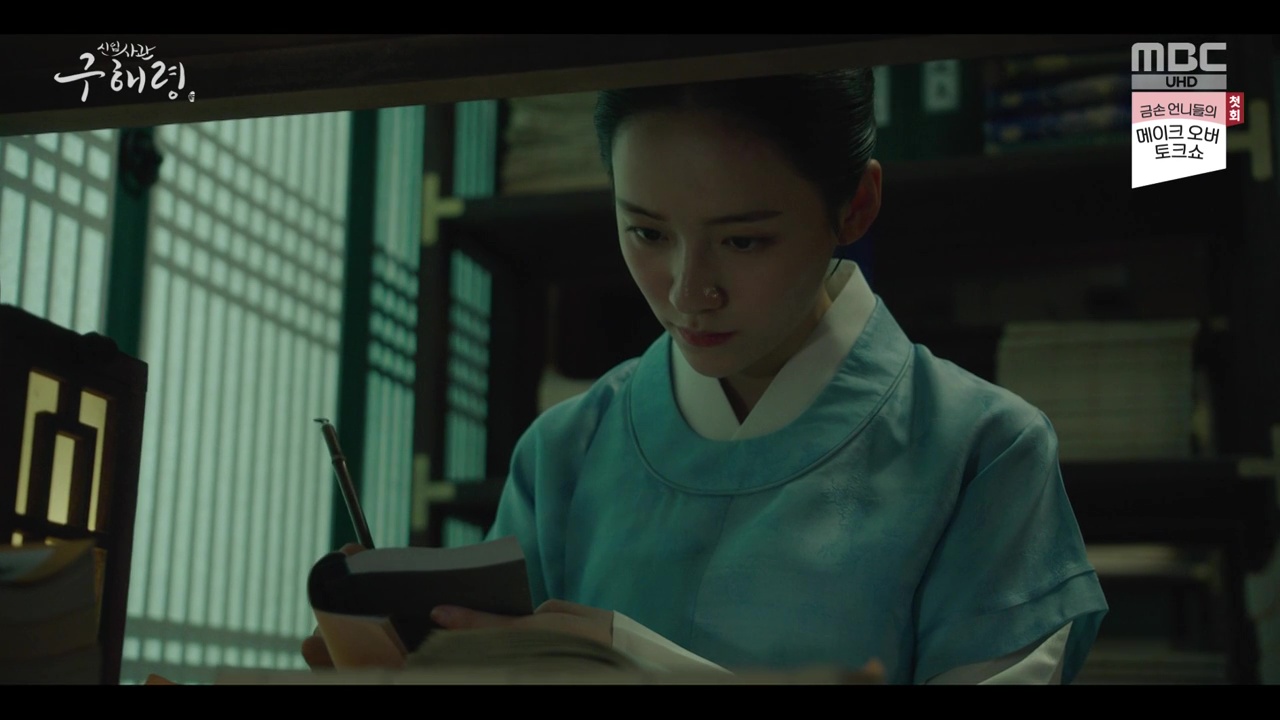 Woo-won petitions to impeach Historian Seong, and Jin approves it—a move that shocks and dismays the other historians. Hae-ryung even yells at Woo-won a little for putting principle over people, saying she doesn’t wish to understand such a mindset. But Sa-hee reveals that Woo-won actually apologized to Jin and begged that he only be fired and exiled for daring to threaten the royal family.

I’d feel warmer toward her about this if she didn’t also copy the record of Rim’s visit to the king, in which he confessed to harboring the Westerner, and then send it to Councilor Min—who then takes the king to task for not telling him about it. I’m beginning to wonder how dark the dirt Min has on the king is, given how completely under his control the man is. 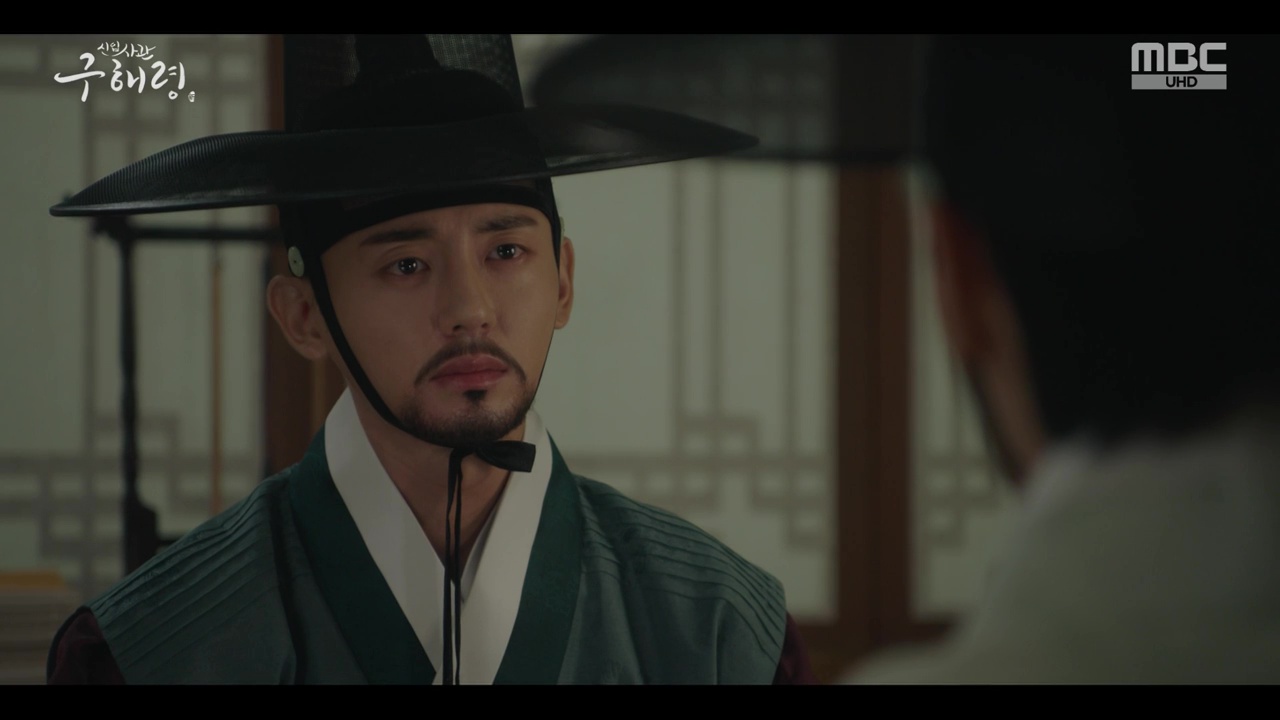 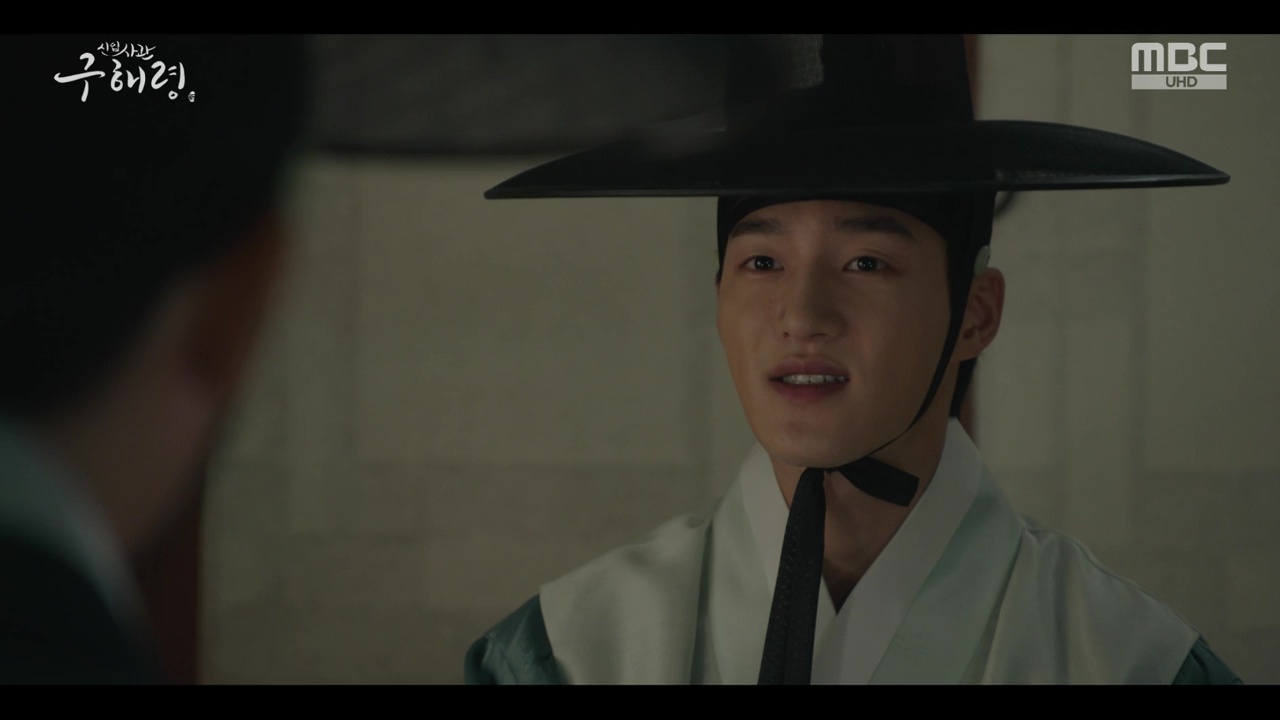 Woo-won visits Seong to say goodbye, asking if his faith is so great that he’s willing to give up his life’s work. Seong plans to devote his life to teaching and defending regular folk now, and says that his faith isn’t so great, which is why he plans to protect it. He promises to write to Woo-won.

Hae-ryung and Rim, meanwhile, are enjoying the early days of their love affair a little too publicly, which causes them to be discovered by Ah-ran and In-im, who protectively interrogate Rim about his intentions and how long this has been going on (he answers without hesitation that it’s since he first met her, aw). 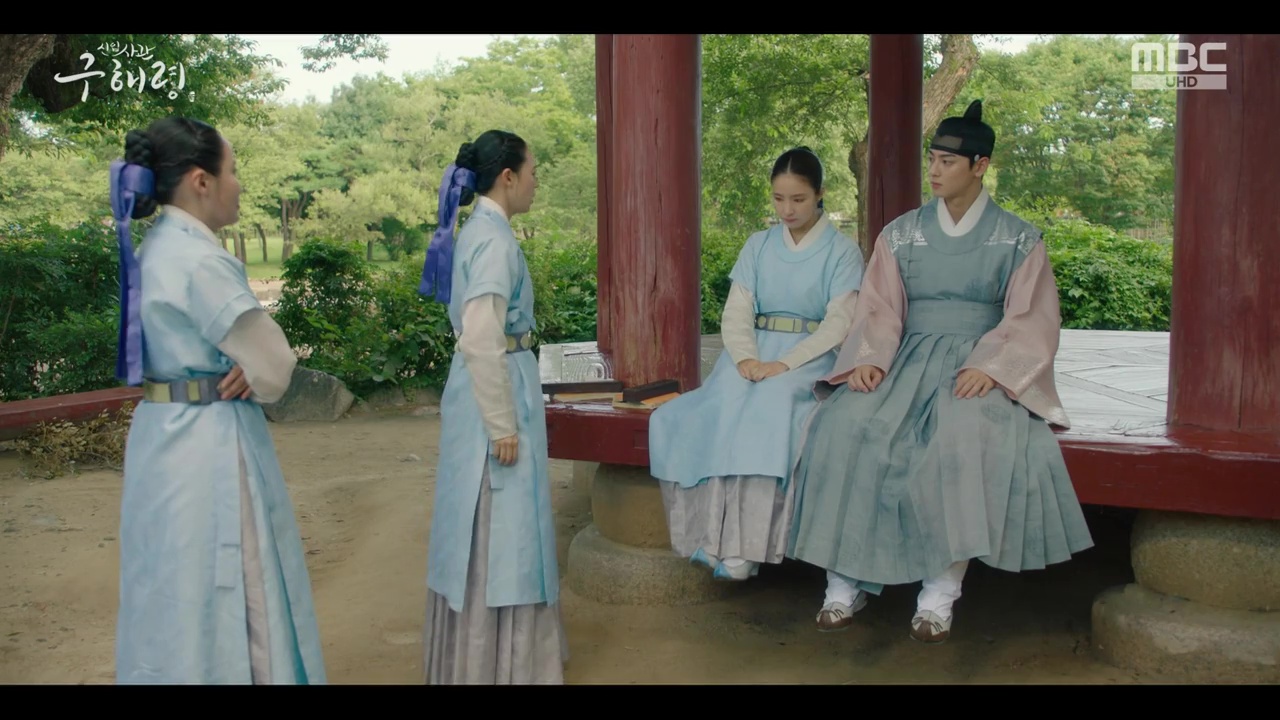 They’re mad at Hae-ryung for not telling them, but delighted to discover such a juicy secret, and needle her mercilessly for details.

But The Angst has arrived, because Councilor Min the king has launched plans for Rim’s wedding. Both Rim and Hae-ryung are devastated by this news, but she congratulates him for finally being able to leave the palace. Rim declares that he’ll marry no one other than her, but she asks if the price of her feelings for him is to be consigned to the role of a prince’s wife. 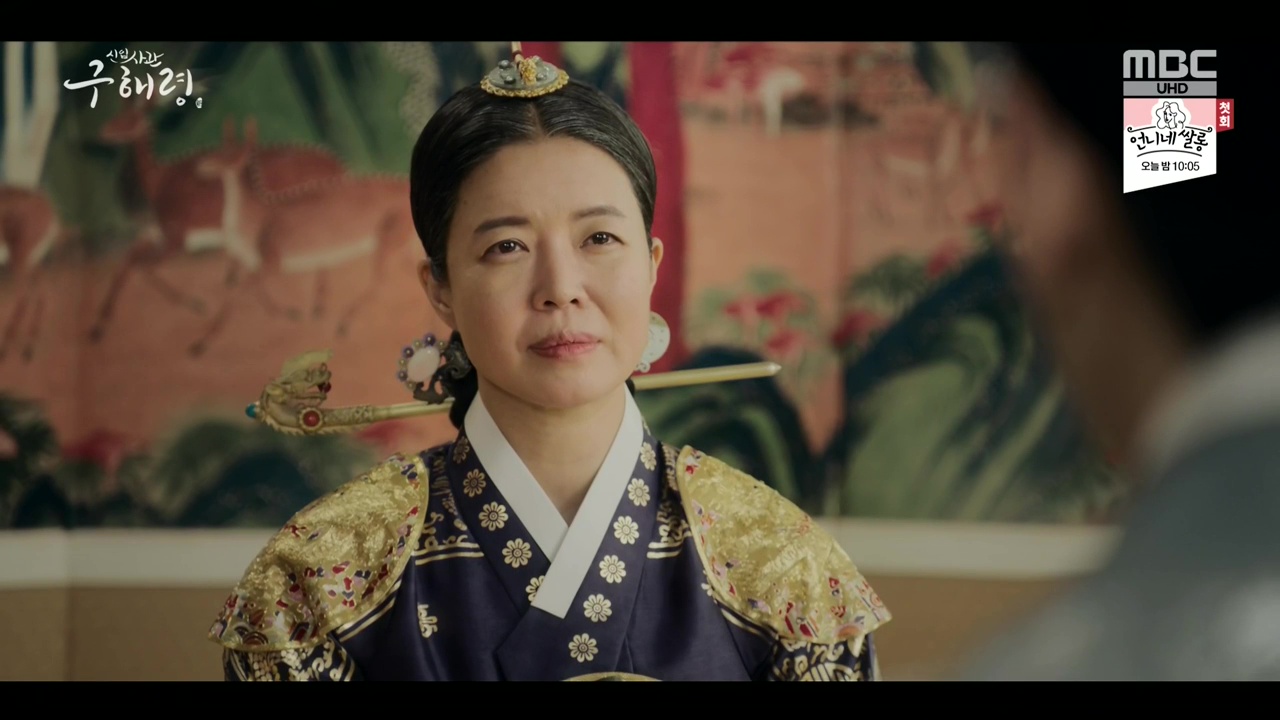 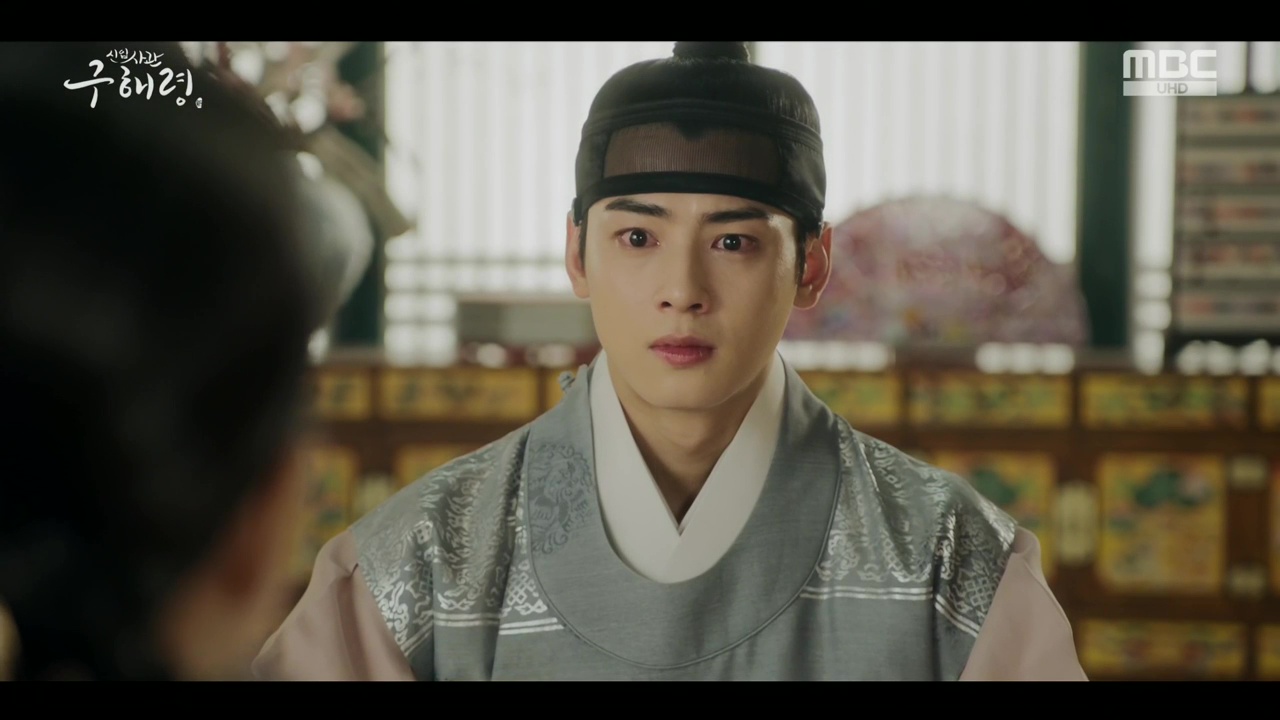 Unable to accept this, Rim all but drags her to the dowager queen’s chamber with him, where he declares that he’s deeply in love with a woman already and asks his grandmother to retract the order for his wedding. The dowager queen doesn’t even want to know who the woman is. She tells him to bury that feeling in his heart, and accept his fate—a prince does not marry for love, but according to the demands of his station.

When they walk out Rim asks Hae-ryung how she can be so calm, and she says she’s holding back her anger. (I would be too, after being forced to write all of that down.) If the queen had agreed, would he have pushed forward their marriage, even though she’s already told him she doesn’t want that life? 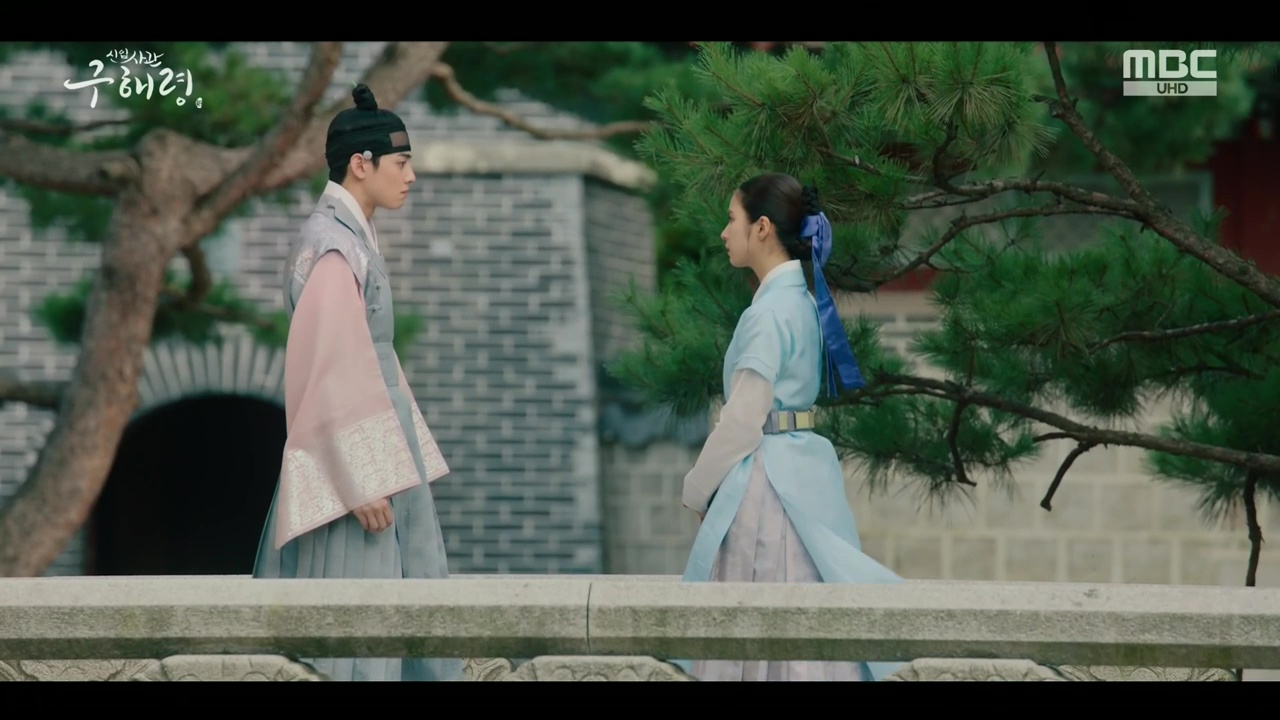 Rim tells her to do it anyway, because otherwise he’ll lose her. He begs her to tell him that she doesn’t want him to marry anyone else, that she’s not all right, but she simply says, “It’s a royal order. Follow it.” He walks away from her without another word, and waits until he’s in his room to weep silently.

Hae-ryung keeps it together, though—until Woo-won reassigns her to the dowager queen’s rooms to record the marriage preparations. Ouch, dude. Day after day, she gets through the parade of ideal Joseon beauties with a stiff drink before she goes to bed, until she finally admits to herself that Rim was right: she’s not all right. 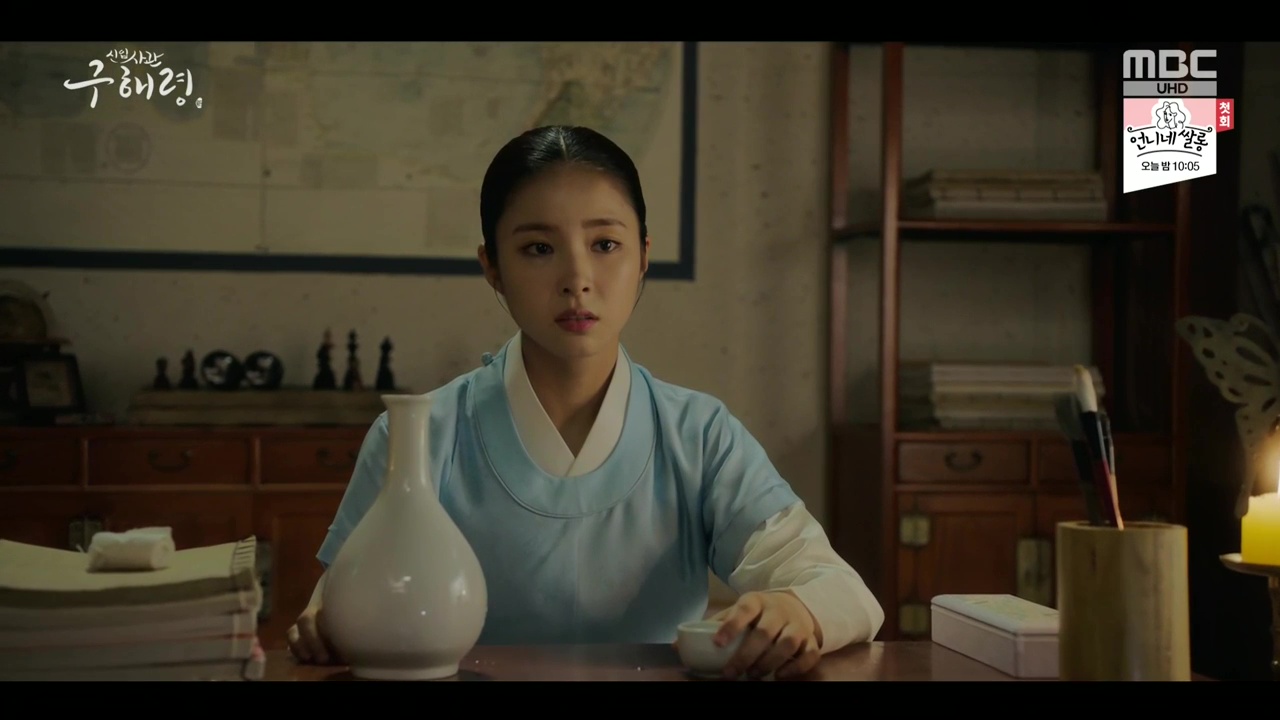 The dowager queen has hand-picked a bride for Rim in preparation for this day, but Councilor Min’s plan is to marry him to Sa-hee. When Sa-hee finds out, she refuses, but Min asks what on earth she expected when she started working for him if not to be placed where he needed her, and tells her not to bother with being a historian anymore.

Ignoring Min’s orders, Sa-hee shows up for work the next day. Jin sarcastically congratulates an already miserable Sa-hee, disappointed that she turned out to be grasping for political power despite all her pretty speeches otherwise. 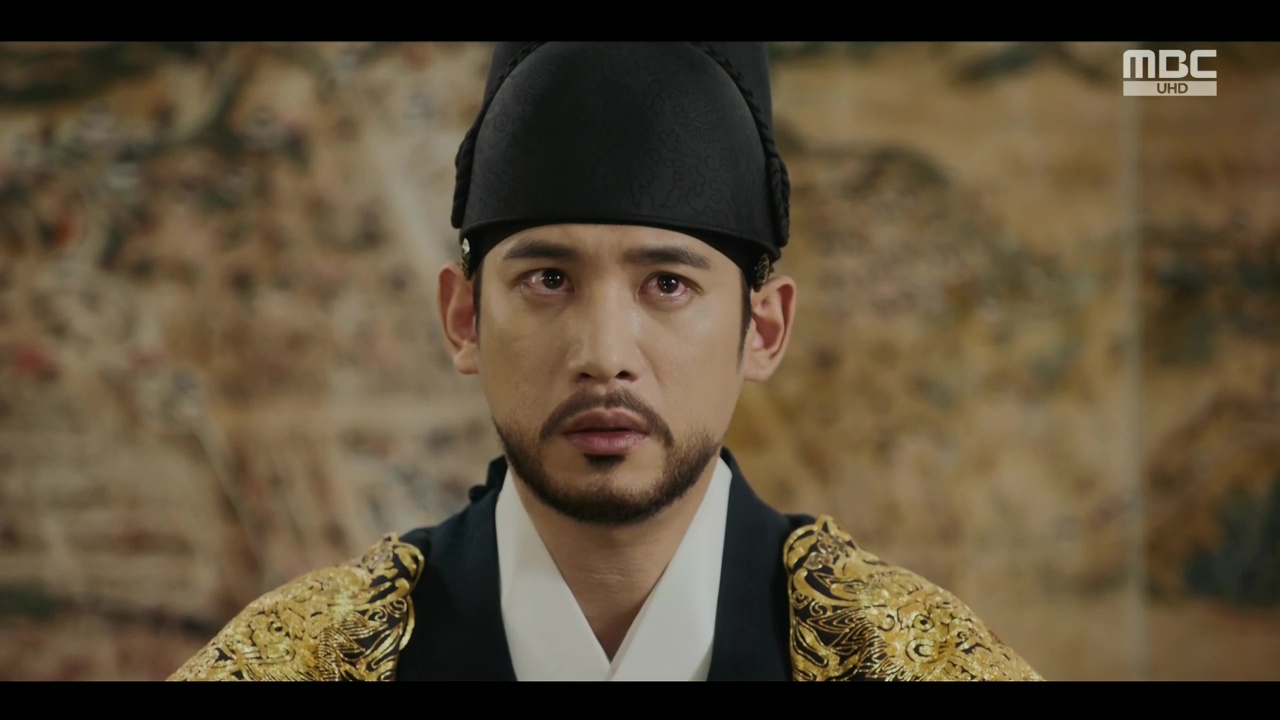 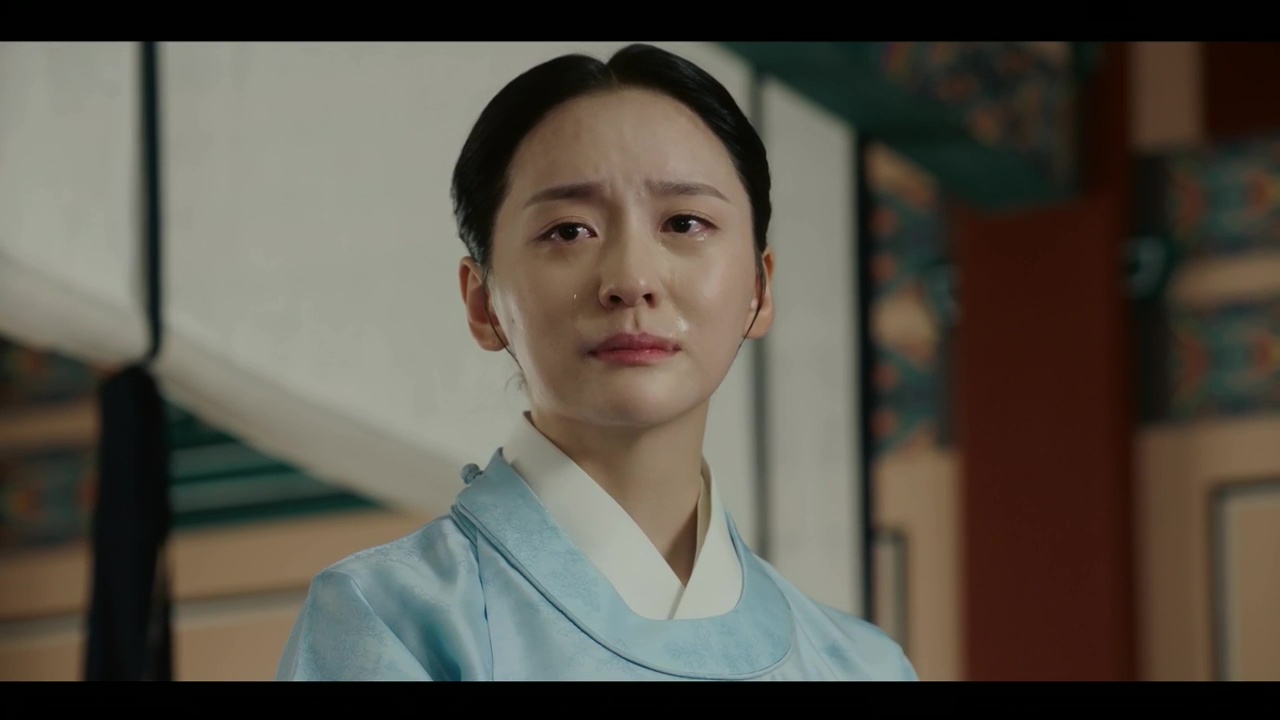 She responds bitterly that she thought working for Min would give her the ability to make her own choices; she feels wretched at the realization that her life is not her own. Jin replies that he knows the feeling, and asks her to stay.

Sa-hee does—until dawn the next day, and is spotted coming out. OMG. When the scandal breaks, Sa-hee goes straight to the furious crown princess, who warns that this could ruin her life. Sa-hee says that she knows, and doesn’t regret being true to her feelings. 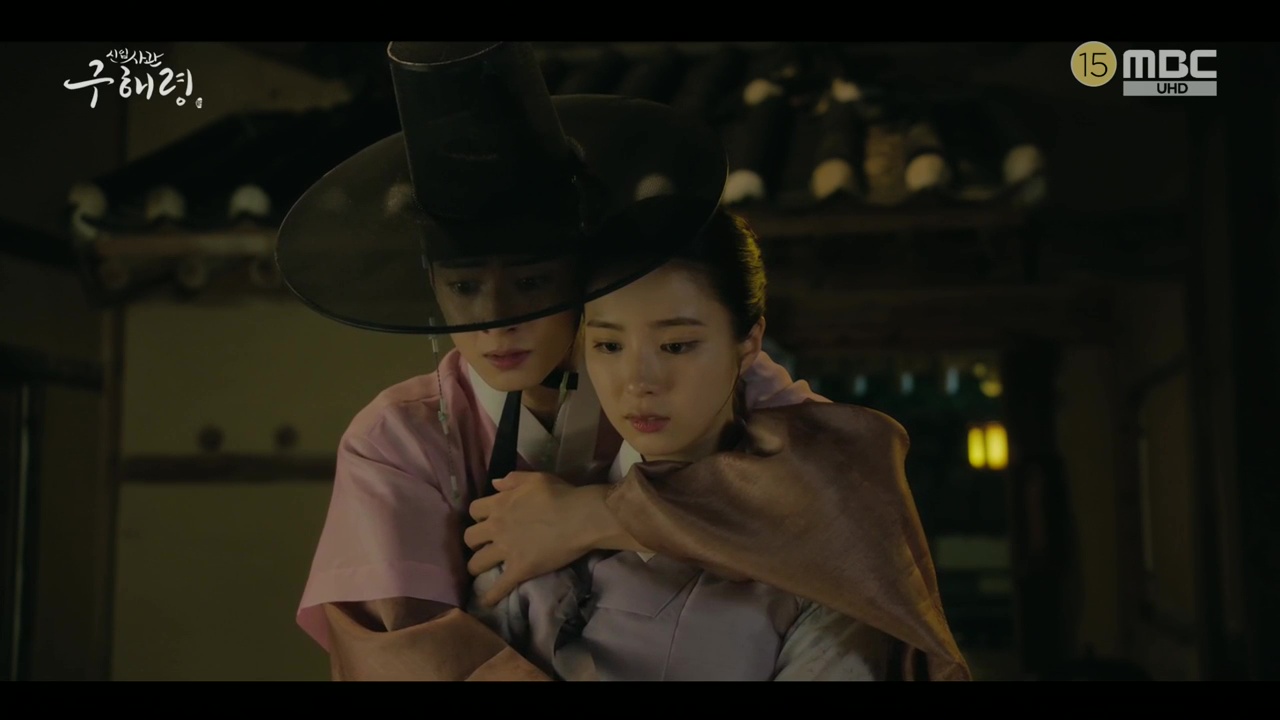 Sam-bo takes Rim to look at houses, hoping to cheer him up, but finding the perfect home only causes Rim to imagine an idyllic married life with Hae-ryung. Suddenly desperate, Rim runs all the way to her house and declares that she doesn’t have to be a prince’s wife; he promises to leave it all behind if only she’ll run away with him.

Hae-ryung says that’s only a happy ending in a novel. They’ll tire of spending their days feeling chased, and eventually come to resent each other. He promises he won’t, but she asks what he’ll do if she comes to regret it. Would he be able to bear that? 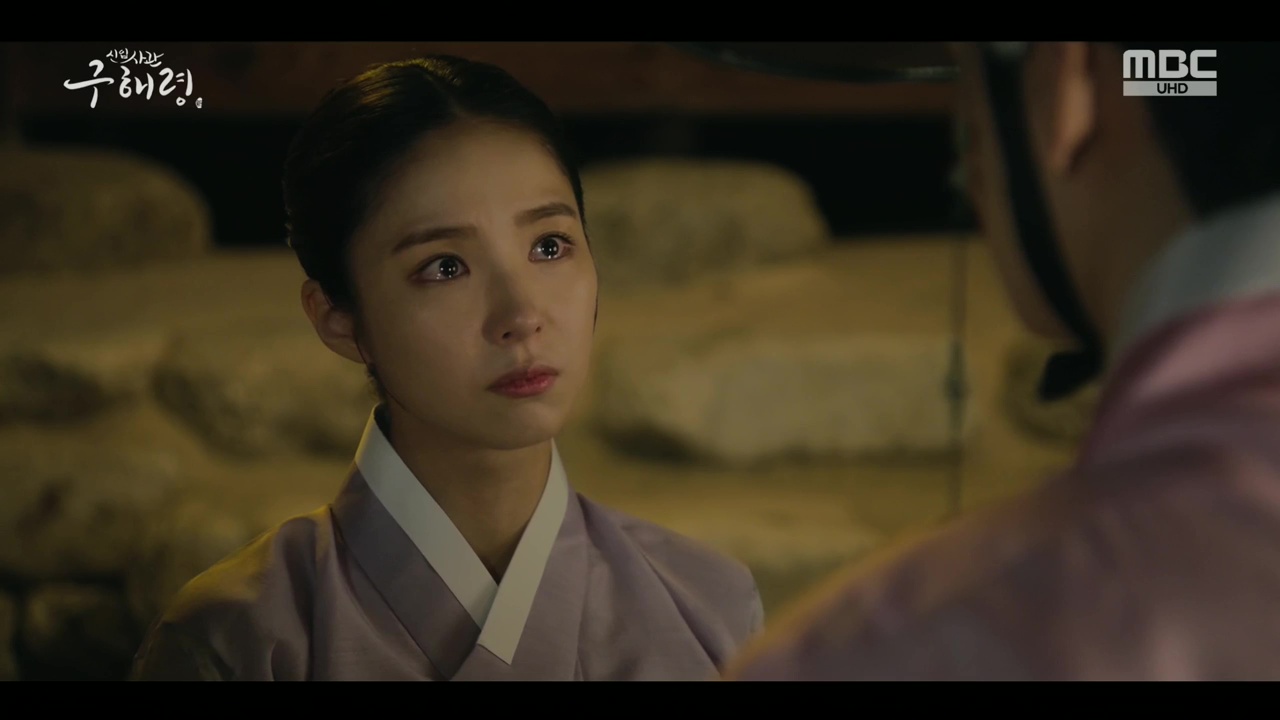 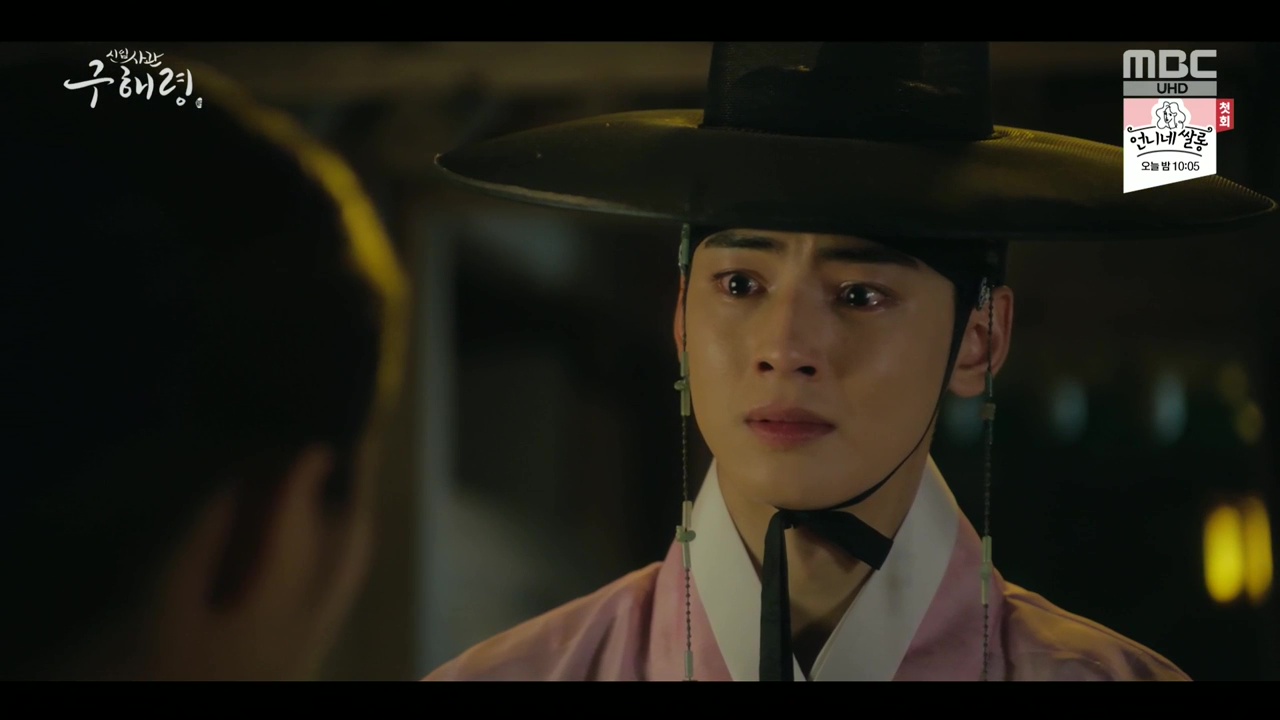 She tells him to find someone better than her, who will love him unreservedly and share his life. He says, “Hae-ryung, you know you’re everything to me.” She says she’s sorry but that’s not the case for her.

They both cry their eyes out once they’re alone. Oh, my babies. Me too.

We certainly knew this was coming, but that doesn’t make it any less heartbreaking to see Rim’s hopes of an idyllic marriage to Hae-ryung shatter so soon, and to watch Hae-ryung be put in an impossible situation with no real solution. Here’s where the rubber hits the road when it comes to their opposing outlooks on life; both of them know that reality isn’t all sunshine and roses, but Rim is still willing to dream anyway, whereas Hae-ryung is far more pragmatic, and knows that while taking risks might lead to happiness, it can also end up in devastating loss. 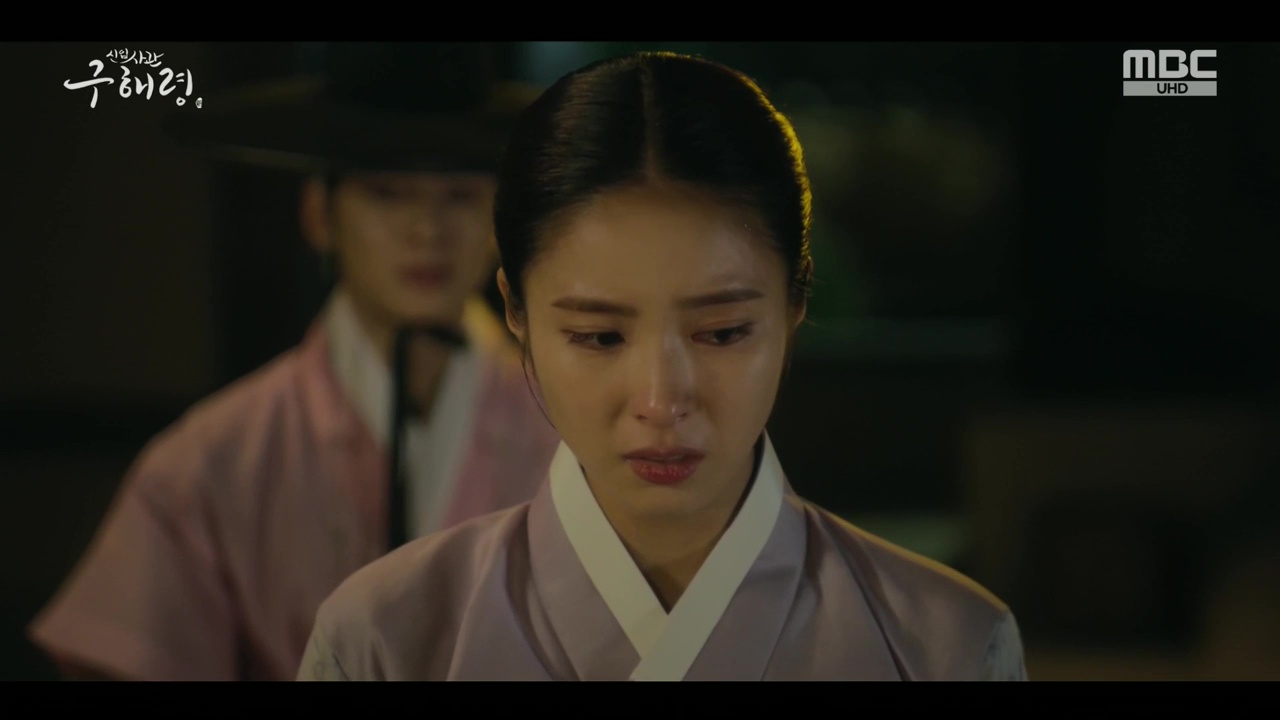 I can understand her reservations about becoming a prince’s wife, especially after witnessing that parade of prospective brides told her exactly what qualities the dowager queen is looking for in a granddaughter-in-law: obedience rather than education, poise and decorum rather than a woman who speaks her mind. Not Hae-ryung, in other words. Which is probably the lesson Woo-won wanted her to learn when he assigned her to the queen, but that doesn’t make it any less cruel, knowing what he does about her feelings.

I am a little befuddled about where Hae-ryung imagined this going though, given her well-established practicality and the fact that she already knows there’s likely no long-term future in it for them. Did she simply get carried away by her feelings for Rim, and forget to consider what he might expect—or what kind of scandal might result? It’s a small character inconsistency I felt while watching these episodes, although I certainly don’t blame her for falling for Rim, and I agree with her conclusion at the end. She has never wanted the kind of married life that she’d have to lead as Rim’s wife, even if by some miracle the court accepted her, and running away is a dream that would most likely end in misery. But it’s still very hard to watch their poor hearts breaking. 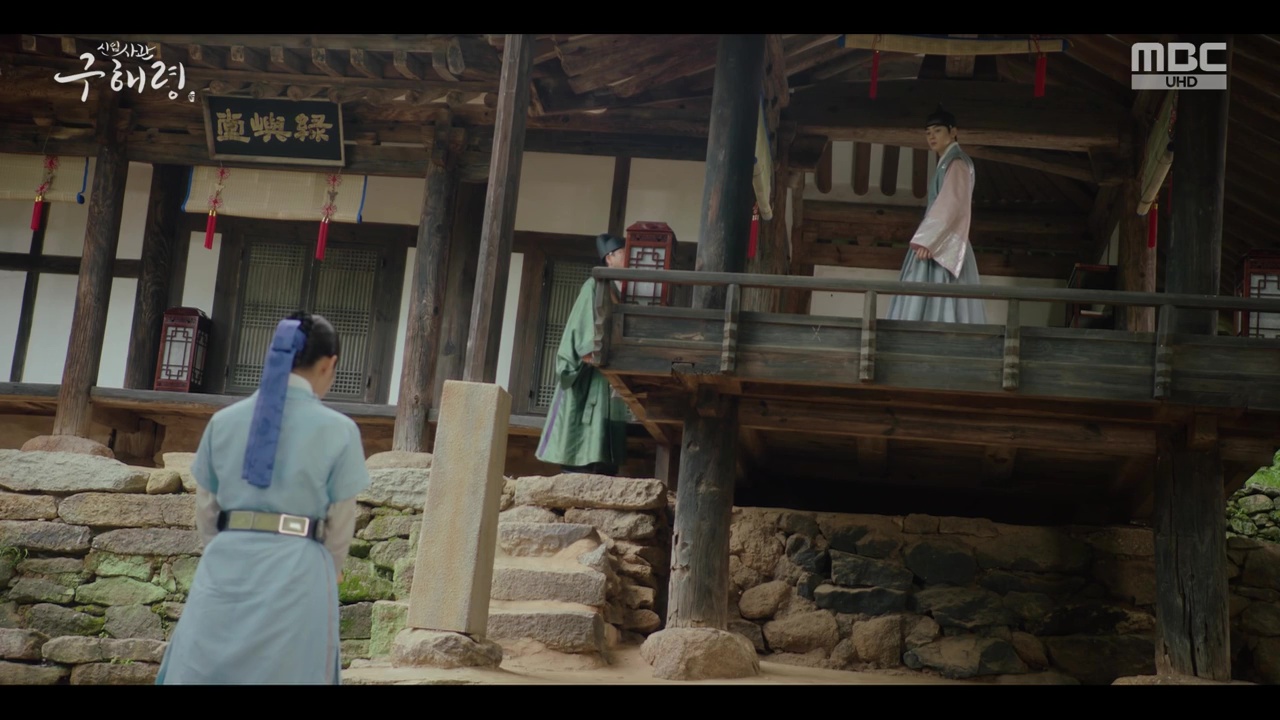 I’m still confused by Sa-hee’s character, although I suppose we did get an answer to why she decided to spy for Min when she was so adamant about taking her father’s corruption to task. It’s not an answer that necessarily makes sense to me, and I have slight whiplash from Sa-hee suddenly having such an epic love for Jin that she’s willing to ruin her life, but spending the night was certainly a brave and clever scheme to avoid the marriage (if she did it on purpose, which I’m guessing she did). These two actors are also killing it, even if their relationship doesn’t always make sense to me. Those tearful looks they gave each other—guh. (Also, who knew I would love Beardy Crown Prince Park Ki-woong this much? Not I.)

Min’s plot for the wedding has been thwarted, but I’m guessing the marriage preparations will go ahead anyway unless Rim takes some drastic action. The poor puppy’s just had his heart crushed, though, so I’m guessing next week will be devoted to finding out what exactly the story is behind Ho Dam, the dowager queen, and Seoraewon. Things might get a little bloody, given how ominous Min’s demeanor has gotten, and his now open threats to the royal family. *puts arms protectively around Jin and Rim and wishes for a little more time in dreamland* 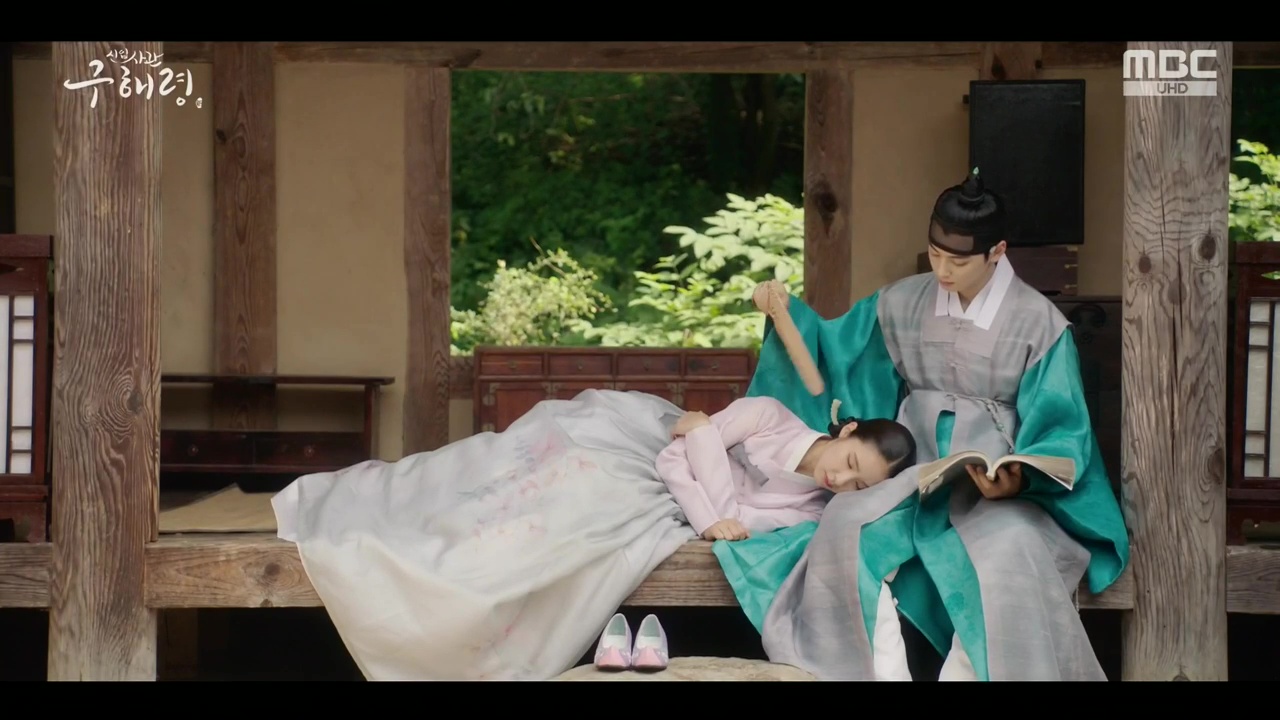