The Letter I Wrote To My Mother Asking For A Puppy In Second Grade, Annotated

The Letter I Wrote To My Mother Asking For A Puppy In Second Grade, Annotated

Growing up, my mother would reiterate two things that would never happen to me and my sister:

As for the first one, it remained true. We never did go to Disney World. But joke’s on you NOW, mother! I’m in a relationship with a woman who lives in Orlando!!!! Do I kind of want to go to Disney JUST to spite my mother? Yes. (I have mommy issues.)

Number two has, so far in my life, proven correct as well. We certainly never ever got a puppy or even came close to getting a puppy in my childhood. The reason? My dad doesn’t like pets. He barely tolerated the cats my sister and I eventually got for Christmas. I think the only word he ever spoke to them was “shoo.”

So we were puppyless, which is not necessarily the worst thing to be, except in second grade when every minuscule inconvenience feels HUGE and all problems seem immediately solvable by the presence of a puppy. (To be fair, as an adult, I’m pretty sure all of my problems would be solved by a pet duck, so did I ever outgrow this line of thinking?)

I decided to take matters into my own hands and write a letter to my mother asking her for a puppy. This was for a school assignment, and I believe our only instruction was to write a letter to a family member. We were probably supposed to tell them nice things, not ask them for shit. But I saw an opportunity, and I took it.

Here is a photo of the letter, and you can find my transcription and annotations below. 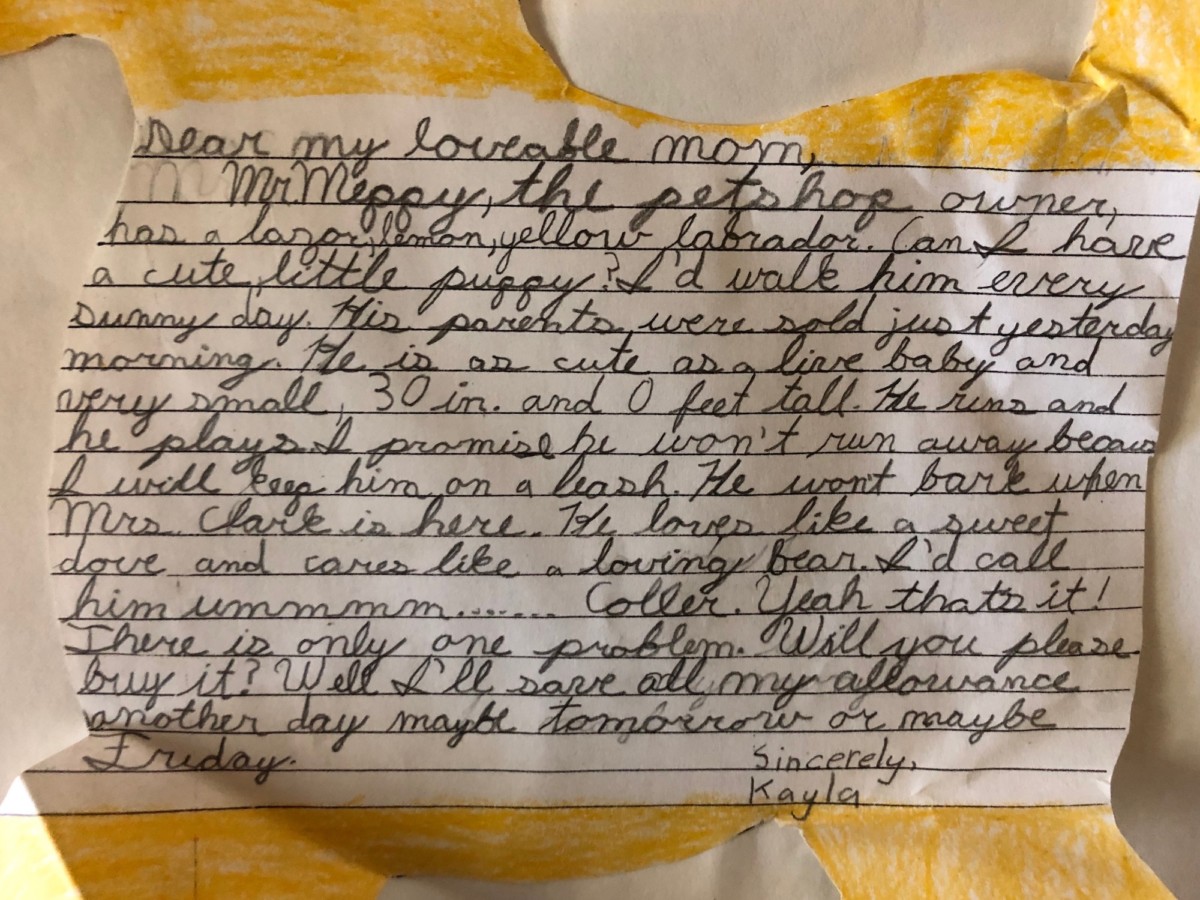 Right out the gate starting with some true kiss assery! But note that I did not start this letter with “dear my mom, who I love,” but rather a much more passive and broad descriptor.

I’m going to have to stop myself right there, because this is simply a lie. There is no Mr. Mippy. I have never known a Mr. Mippy in my life, and I know that I’m not just forgetting about Mr. Mippy, because who could possibly forget about a human being named Mr. Mippy? I don’t think I had ever been to a pet shop in my life at this point.

Can I have a cute little puppy? I’d walk him every sunny day. His parents were sold just yesterday morning.

Apparently, I thought the fake puppy’s orphan status was a selling point. Also, I only intended to walk him in nice weather. At least there’s some honesty there.

I wanted to make it very clear that the puppy is as cute as a baby who is alive — NOT a dead baby. This is also where a bizarre rhyme scheme emerges in this letter?

He runs and he plays. I promise he won’t run away because I will keep him on a leash.

I would have been a very responsible pet owner (reminder: on sunny days ONLY).

He won’t bark when Mrs. Clark is here.

Like Mr. Mippy, Mrs. Clark is not real. I have never known a Mrs. Clark. I think I just was married to the rhyme within this sentence.

Can someone please explain why this is a poem now?

Presumably, I meant to spell the name Collar, and despite my liberal use of rhyme in my correspondence, I apparently lacked the creativity to come up for a name for a puppy other than the thing that it wears. I suppose I would have named a pet bird Wings and a pet turtle Shell. I also know for a fact that I wrote “ummmm” there because of how much I enjoyed writing repeated Ms in cursive! That shit is fun!!!!

There is only one problem.

Will you please buy it?

Well I’ll save all my allowance

At least I was willing to chip in!

While my lie about the existence of a Mr. Mippy was flawless, I barely put any effort into the lie that I would save my allowance for a puppy. Maybe tomorrow or maybe Friday? BITCH! The lies!

I have literally no idea why this letter did not work.